s::can and Aaxis win data supply contract for Indian Clean Ganga Project
Vienna, April 2016: Due to fast population growth, migration and industrialization, the pollution of the Ganges river has become a major issue for India and one of the biggest environmental challenges on earth. The Ganges river is a holy river and a goddess according to Hindu religion, and it is a major concern for every Hindu to reanimate and keep it alive. To clean the river is not only a big technical challenge, but also of enormous cultural and spiritual importance.

Therefore, the “National Mission for Clean Ganga” was born in 2011 by the Indian government sup-ported by religious leaders, to fight the pollution and try to revive the river and its surroundings. The World Bank is supporting the “National Ganga River Basin Project”, which includes the construction of waste water collection systems and treatment plants to reduce the discharge of waste water with a total amount of $1 billion.
On April 7th, a 5 years water quality data supply contract was appointed to s::can by the Central Pollu-tion Control Board (CPCB), the government authority in charge. The 36 monitoring stations will be de-signed, installed and operated by s::can Messtechnik GmbH in close co-operation with the local In-dian partner, Aaxis Nano. The measuring stations will continuously send real time water quality data to the Central Pollution Control Board in New Delhi. The collected information will strengthen the reg-ulation and oversight of the river’s pollution load by helping planners better understand the origins of pollution, as well as to assess the impact of treatment on the water’s quality. 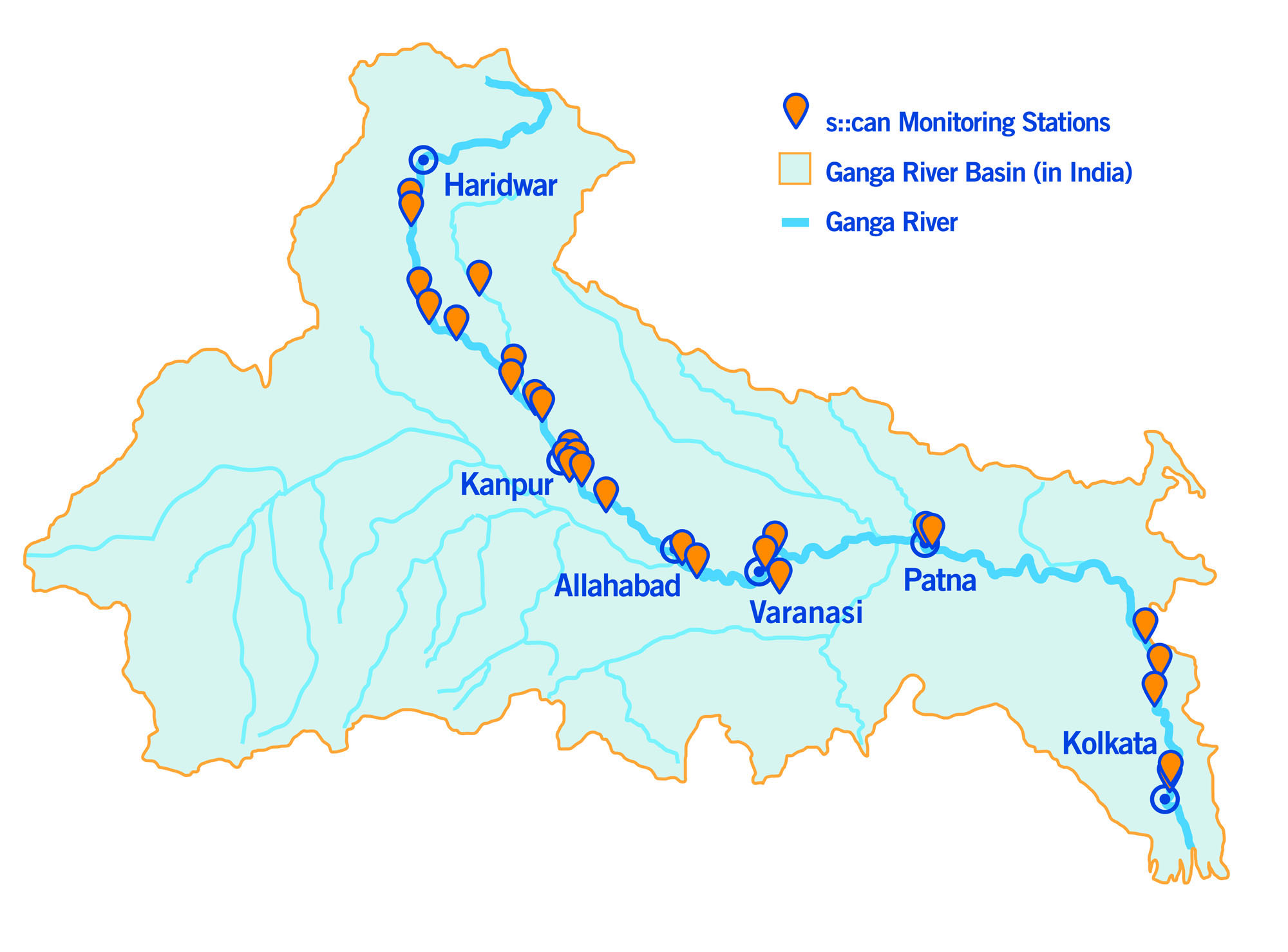 Since 2013, 13 s::can online monitoring stations have already proven to deliver valid data from the Ganges river and tributaries, and, also due to our partner Aaxis’ great efforts, are close to 100% op-erational, extremely reliable, and tolerant to the extreme environmental conditions in India.
The new contract is only a first phase of an even larger program to acquire reliable water quality data along the Ganges, and other Indian rivers, and will be a global reference.
First of all, s::can is proud to be part of this big national effort, and will contribute to the cleaning of the Ganges with know-how, technology, heart and soul.
But this project is also an important step to further strengthen s::cans’ position as the market leader in India, and global technology leader in online water quality monitoring. s::can’s patented core method, online UV-Vis-spectrometry, has become a standard by law in India – for manifold reasons, but finally the match-winning criteria was the perfect combination of reliability, accuracy, and affordability.
About s::can s::can has given its heart and soul to online water quality measurement. Since its foundation, nothing else has come out of the development department; nothing else has come out of the production sites.
s::can products measure a wide range of parameters in different applications in the areas of drinking water, waste water, environmental monitoring and industrial applications. All products are developed with the same philosophy in mind: s::can measuring instruments are precise, intelligent, robust, and require little or no maintenance.
s::can Messtechnik GmbH was founded in 1999 and is based in Vienna/Austria. With sales offices in 5 countries and sales partners around the world, s::can measuring systems are available in 40 coun-tries. Today, with close to 7000 systems sold, s::can is the global leader in online optical water moni-toring systems.
All news, Innovation and Projects, News Technology Innovation, SMEs, Uncategorized
New Possibilities to Investigate water Quality and Transportation Issues with Online Sensoring
Eight s::can nano::stations have been installed at key locations of Vitens’ Smart Water Network